We don't have children. But we do have two dogs that act like children.

Scratch that.  We have two dogs that are treated like children.

Sunday morning was "Interceptor Day!"  It sounds fancy, doesn't it?  Like there should be fireworks and congressional lapel pins, but really, it's just the day that my dogs get their heartworm medicine.  And I suppose if you'd like to fashion a congressional lapel pin based on heartworms, well, be my guest.  But I prefer to celebrate, by typing the monthly task into my online computer calendar that way...with caps and an exclamation point.  Interceptor Day!  Makes me feel excited about something. (sad face)
We are a bonified pet pharmacy in our house. Boy Dog has quite a few issues... a few of which we medicate for, three times a day, with the helpful use of hotdogs.  You stick the pill in a chunk of cheap hotdog and Boy Dog will swallow it whole.  And even though there's not a single thing wrong with Girl Dog, she of course, must have a hot dog as well.  This is reminiscent of grandparents, who give the older child a gift, "so they don't feel left out," when the younger child has a birthday. (Ugh. I won't get on my soapbox.)

So, back to Sunday morning.  Interceptor Day!

The morning started out as it normally does, with me, groggily standing at the top of the stairs... it's a sight to be seen.  All this 'aint a pretty picture in the morning... but the dogs don't seem to mind, and normally, they eagerly greet me on the stairs for their morning gooby-boooby-boo session.  Uh, yea... that's puppy talk.  Anyway.

This morning, they were mysteriously absent.

Covering the living room and moving towards the coffee pot in record speed, due to the absence of my canine speed bumps, something caught my eye.

It was the wrapper, from a stick of butter, which had been left on the table from dinner the night before.  Just an empty wrapper... which means one of the dogs, had just eaten a stick of butter.

Coffee in hand and still missing the normal company of my dogs... I headed to the basement... to find Boy Dog eating a roll of paper towels.  I suppose you need something to wipe the butter grease off your mouth, right?

Now, I have to say... up until this point... I've kept my cool. I find the emergency vet's phone number... I calmly explain that one of my dogs has eaten a roll of paper towels for breakfast... and one or the other, has topped it off with a stick of butter.  "Need I be concerned?" I ask.  Friendly Vet-Tech says, "oh no, don't worry about it... you just might have a few rough days ahead of you." Joy.

I hang up the phone.  I give the dogs a dirty look.  I give God thanks that a roll of paper towels and a stick of butter did not cost me a few hundred dollars with aforementioned Friendly Vet-Tech... and I remember that it is Interceptor Day! Yeah!

Grabbing hot dogs and pills, I pop the tiny Interceptor pills into their respective hotdogs, and present our eager, albeit stopped up dogs with their medicated treats.  Boy Dog, per his usual behavior, swallows his whole.  Girl Dog, sensing that there is something amis... something has been SNUCK into her normally "pure" hotdog... must investigate.  Taking it carefully in her mouth, she moves to the living room... well, this is NOT my first time on the ferriswheel, and being the gifted and talented dog-mother that I am, I anticipate this move... so I squarely position myself between Girl Dog, Hot Dog... and Boy Dog.  Sternly, I look the drooling mess of a Boy Dog in the eye and say, "Don't even think about it."

He looks at me... sizes up the opening between my legs... looks back at me... and begins to lunge forward... "NO!"  I have stopped him in his tracks.

He looks at me again... sizes ME up... thinks it through... refers to his Dog Manual... calls his buddy in Arizona who concurs... and decides that the benefits of having another hotdog, FAR outweigh the repercussions.

Dropping my hand to the floor to retrieve the hotdog... I miss it by seconds... and before I can say "Bad Dog" it had slipped down the proverbial hatch.  Now Boy Dog has had two heartworm pills.

And I sort of lost it.

Mother's grabbed their playing children out of the driveways and ushered them inside.  Birds retreated to the safety of the skies.  Dogs ceased their barking.  And the neighborhood cats... laughed.

For maybe the third time in nearly 8 years... Wyatt had made me mad.  And he knew it.  No sooner had I turned around, Boy Dog was making his way out to the garage with his tail tucked and head down.

And I dialed the emergency vet's number... again.

"Hi!  I called a few minutes ago about the dog that ate the stick of butter and the roll of paper towels.  Yeah... well, I'm pretty sure I just overdosed that same dog.  Please don't call animal control."

By the end of the conversation, Friendly Vet-Tech assured me he would not die, but would merely experience an upset tummy and (my absolute favorite), possibly some "loose stool."

Hanging up the phone, I realized I still needed to get Abby her Interceptor pill. Stuffing it in a hotdog and offering it to her, I was failing miserably... so, I resorted to the ol', crank-her-mouth-open-and-stuff-it-down-her-throat trick.

Two times.  Three times.  Four times... each one, followed by the dramatics of dry heaving and gagging noises.  Trying one more time, I found her jaw... completely locked.  Like Fort Knox.  She was NOT going to take that pill.

Finally, dejected, despondent, and nearly on the verge of tears...and not one to be above theatrics... I crumpled to the floor, barely squeaking out, "Abby.  I just can't do it anymore.  You win.  You all win."  And I sat there, with my arms crossed.  Holding in my hand, a hot dog with the "back up" pill stuffed inside...

Within a few minutes, I watch as Girl Dog belly-crawled over to me... head down, eyes averted... and stuck her sweet nose in to the crook of my elbow.  All but crawling into my lap, she waited... waited for me to forgive her, waited for words of reassurance, waited for a single touch, that showed her that it was all better.

And after a few minutes... convinced that I wasn't going to throw her out of the pack... she lifted her head, and turned to my other hand, where the hotdog was still clenched.

Nuzzling open my hand, she gently took the hot dog... and with great intentionality, chewed... and swallowed.

Some things just aren't worth the fight.

So on this cool, almost Fall-like day, don't fight it... make this jam.  It'll make me happy... and as you can see... I need a little happiness in my life! 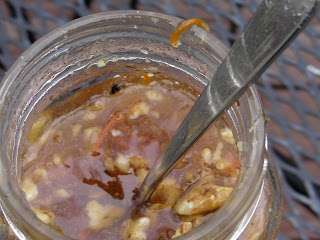 6 1/2 Cups granulated sugar
1/2 Teaspoon butter
1/2 Cup finely chopped walnuts
If you are going to preserve this jam, you'll want to prepare everything as you normally would... boil the jars, warm the lids and rings, etc.


Combine carrots, apples, pineapple, lemon juice, cinnamon, nutmeg, and cloves in large, heavy saucepan. Bring to a boil over high heat, stirring constantly. Reduce heat to simmer, cover, and cook 20 minutes, stirring occasionally. Meanwhile, pulse raisins in food processor until finely chopped. That way, all you raisin haters won't be able to tell they're in there! Whooo-ha-ha-ha.  That was my evil laugh.  Set aside.
After 20 minutes, remove the pot from heat and stir in pectin until dissolved. Stir in raisins, breaking up clumps with back of spoon. Return pot to heat and bring to boil. Add sugar all at once. Die a little bit inside, when you see 6 and 1/2 cups of sugar go into something you will be serving your friends and family, and return to a boil, stirring constantly. Add butter and boil hard for one minute. Remove pot from heat, skim off any foam if you want (though I usually skip this step), and stir in walnuts.
Ladle hot jam into hot sterilized jars, leaving 1/4-inch headspace. Wipe rims of the jars, cover with lids, and screw bands on until just barely tight. Place jars on rack in pot and cover completely with water. Cover pot and bring to a boil over high heat. Boil for 10 minutes. Turn off heat, uncover pot, and allow jars to rest in water for five minutes. Remove jars from pot and allow them to sit undisturbed on the countertop for six hours or overnight. 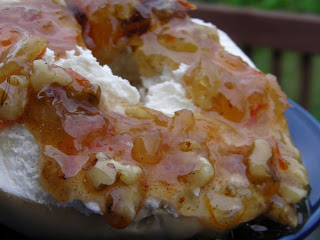 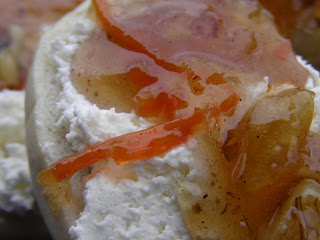 I wish I had been the one to create this recipe... because it is GENIUS!  But alas, I found it at seriouseats.com days ago... you know, when there was snow on the ground and I was foolishly searching for recipes that would convince me that Spring was on its way...  It's sweet. Sticky.  I sort of wish it had more carrots in it (literally, never thought I would say that).  And has six and half cups of sugar in it.  But it's totally worth a try... and the sugar crash that follows.
Please enjoy and... by the way, Boy Dog and I have made up.
Posted by Tricia at 3:43 PM No comments:
Email ThisBlogThis!Share to TwitterShare to FacebookShare to Pinterest
Labels: Cake, Canning, Dogs, Jam
Newer Posts Older Posts Home
Subscribe to: Posts (Atom)