I was watching the X Games tonight.

I'll let that sink in first.

Well, let's just say that, if I could laminate my "list" (that's a Friends reference), a little red-headed, boy-wonder, named Shaun White, would be front and center.

Anyway, we were watching Snowboard Cross this evening, and I turned to Brett and said, "You know, I'd really like to learn how to snowboard."

A few minutes later, the commentators said something about a 28 year old competitor getting ready to "age out" and I turned back to Brett and said, "I'm gonna need to get on the ball... my time is almost up."

And Brett goes, "Are you planning on competing?"  And I, with all sincerity, said, "Well, I am having a bit of an identity crises...maybe this is the way I go!"

Maybe you had to be there... but we laughed for ten minutes.

Now, to be clear... I once stepped out of bed, twisted my ankle, and couldn't walk for two days.  Gretchen Blierler made up a trick called The Crippler, which involves spinning 180*, 60 feet in the air, while you're upside down.  I figure as soon as I can master Getting Out Of Bed (an exceptionally difficult trick, some mornings)... I'm just a few rides away from tackling the Crippler.

So of course, I'll need a hearty breakfast to fuel my day on the slopes (we're going to completely ignore the fact, that the nearest" slope", and-by-slope-I-mean-icy-hill, is about two hours away) and I made Pumpkin Oatmeal.

Bring milk and oats to a boil and let simmer, stirring occasionally, for about five minutes.  Stir in sugar, spice... and everything nice.  Including pumpkin. Let simmer for another minute or two.  Stir in cranberries. 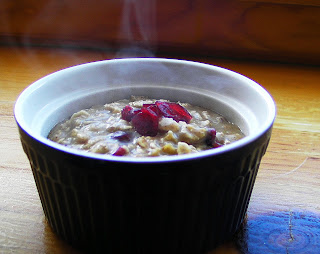 It wasn't too bad.  I mean... it's oatmeal, so let's have some perspective. But it would be a great way to use up leftover puree.  Or I can even imagine throwing some pumpkin pie... like actual, leftover pie... into the oatmeal.  Might be good.

So, live out your dreams today. Even if it only means getting out of bed, without hurting yourself.
Posted by Tricia at 10:12 AM 2 comments:
Email ThisBlogThis!Share to TwitterShare to FacebookShare to Pinterest
Labels: Breakfast, Pumpkin

I read in a recent Consumer Reports, that McDonald's Chicken McNuggets are prepared using a preservative called TBHQ. Apparently, TBHQ is derived from petroleum.

A bit more disturbing though?

I also read that chicken nuggets (you know, that yummy ground up chicken paste that constitutes a meat) are mixed with Dimethylpolysiloxane (say that, ten times), an anti-foaming agent used in hair conditioner.

Why the heck do chickens need hair condition? They barely have any hair.

Anyway.  Make some Pumpkin Walnut Focaccia Bread. Nothing weird or hard to pronounce. Just yummy goodness, while you try to live into your new year resolutions! (This recipe is from the Cooking Light Magazine, and each slice... you get eight out of each loaf... will only set you back 169 calories.  Not bad, considering you can eat an over-processed "thin bagel" for 110 calories and feel utterly unsatisfied, exactly four minutes after you finish it.  Or is that just me?) 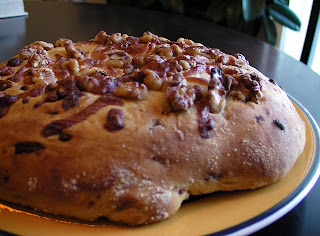 
Add pumpkin, salt, and nutmeg to flour mixture; stir until well combined. Add 2 1/4 cups flour and half of cheese; stir until a soft dough forms. Turn dough out onto a floured surface. Knead until smooth and elastic (about 8 minutes); add enough of remaining 1/4 cup flour, 1 tablespoon at a time, to prevent dough from sticking to hands (dough will feel tacky, but that's probably just the powder blue leisure suit in it's closet).

Place dough in a large bowl coated with cooking spray or olive oil, turning to coat top. Cover and let rise in a warm place (85°), free from drafts, 1 hour or until doubled in size. (Press two fingers into dough. If indentation remains, dough has risen enough.) Punch dough down; cover and let rest 5 minutes. Divide dough in half; shape each half into an 8-inch circle. Place dough circles on a baking sheet sprinkled with cornmeal. Sprinkle remaining cheese and nuts evenly over dough circles; press lightly to adhere. Lightly coat dough circles with cooking spray; cover and let rise 20 minutes (dough will not double in size).

Uncover dough; bake at 400° for 30 minutes or until loaves are browned on the bottom and cheese melts (shield loaves with foil to prevent overbrowning, if necessary). Cool on a wire rack.

Those are in no particular order, by the way.

But did I mention the dresses?

I'm a bit distracted by her unkempt eyebrows...but who am I to judge?  I haven't shaved my legs in three months.

Brett is a lucky, lucky man.

And then there was this one.... simple, elegant, beautiful. 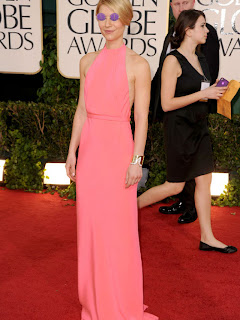 The glasses are overkill... but it's Hollywood.  What do you expect?  And yes, Claire, we get it... you're cool.

Anyway, for this fancy affair, I made Pumpkin Rangoons (baked, not fried, like any good starlet). 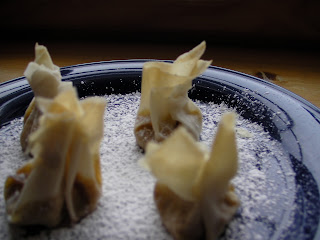 What you'll need:
Wonton papers (found in Asian speciality stores)
1 Cup pumpkin puree
2 Tablespoons brown sugar
2 Teaspoon honey
1 Teaspoon powdered sugar
1 Teaspoon cinnamon
1 Teaspoon nutmeg
Dash of ginger
2 oz. or 2 Servings of light cream cheese
Preheat oven to 325* and line baking sheet with parchment paper. Cut wonton papers into even squares.  Most packages come in 8x8 sheets, allowing you to make four wontons out of each sheet.  Mix all ingredients together and please note, that you can be overly generous with your spices... this is not rocket science.  Or like sitting through Meet Joe Black. Which might just be, the most tedious, longest, most inane movie ever made.  In 1998.


Dollop a rounded spoonful onto each wonton paper, which has previously been cut into even squares.  Wet your fingertips and scrunch those suckers together so they look like little elegant, drawstring, evening bags. Place them gently on your baking sheet and bake for about 12-15 minutes.  They'll start to brown, so keep a watchful eye one them.  Take them out and let them cool on the baking sheet for a few minutes before serving.  Sprinkle generously with powdered sugar.
And don't let this happen: 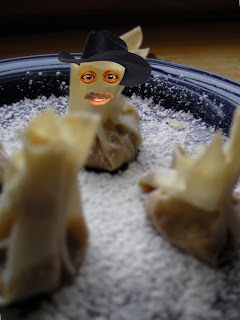 Eeeeeeeverybody wants to be a star.
Anyway.  Devour.

Love.
And call your publicist.  You're gonna have some 'splanin to do in the morning.
Posted by Tricia at 9:57 PM 1 comment:
Email ThisBlogThis!Share to TwitterShare to FacebookShare to Pinterest
Labels: Pastry, Pumpkin

I'm easing back into the blogging world today.

It's a snow day here in the metro, and my husband and I are nestled up by the fire in our footie pjs, waiting for the storm of the century to pass.


Okay.  Nothing to tell the grandchildren about... but to be fair, it is a bit treacherous out there...

I always imagine my brother and sister-in-law in Milwaukee, rolling their eyes at our "snow" as they plow their way to work in 10-12 inches. It's just another January day, for them.
But I really feel for their kids, you know... they'll never really know what a snow-day is... what it means to rush to the window, throw open the curtains, and do the Pauly D fist pump in celebration of freedom. They'll never really know what it means to spend two hours pulling out the sled and piling on 15 layers of clothes, to waddle their way to the nearest hill for thirty minutes of exhausting fun... and, when they're finished and having stripped back down to their skivvies, proceed to drive their parents insane. They'll just never know...

Dang winter preparedness.
Anyway, with 40 some odd cups of pumpkin in my freezer, and no good sledding hill within walking distance, I figured today was a great day to jump back on the pumkin' train.
Here's what you'll need for Pumpkin Pecan Pancake.

2 Cups all purpose flour
4 Teaspoons baking powder
3/4 Teaspoon cinnamon
1/2 Teaspoon nutmeg
Dash or two of allspice
3/4 Cup sugar
1 1/4 Cups pumpkin puree (if using canned, use 1 1/2 - 2)
3 Eggs
3/4 Cup milk
3/4 Vegetable oil
1 1/2 Teaspoon vanilla
Chopped pecans to taste
Sift together all your dry ingredients.
I rarely have the patience for sifting... so a few years ago, I got rid of my large baking sifter and kept this tiny, little, novelty sifter that I found for 99 cents at a kitschy little kitchen store.  So sifting a significant amount of dry ingredient, like so, takes about two days.  But it's totally worth it, ensuring that you get a nice fluffy pancake at the end of the day.
In a separate bowl, combine all the wet ingredients and whisk them together.  When well combined, pour the wet ingredients into the dr,y and stir until "just combined," being careful not to overstir.  You don't want all that sifting, to be for naught.  Fold in your chopped pecans.
Pour by the 1/4 to 1/2 cup full onto your hot griddle, flipping when each pancake begins to bubble.

I'm not gonna lie... these are good and yummy.  So have yourself a snow-day.  And I hope you know what it means to enjoy throwing back the curtains to see a blanket of snow.

Disclaimer: The photos seem to have uploaded with a really low resolution. I'm still getting used to a new toy I received/won prior to Christmas.... an iPad.  So it might take me some time to figure it all out.  Please bear with me.
Posted by Tricia at 1:42 PM 1 comment:
Email ThisBlogThis!Share to TwitterShare to FacebookShare to Pinterest
Labels: Breakfast, Pumpkin
Newer Posts Older Posts Home
Subscribe to: Posts (Atom)