I was going to post this on Christmas Eve... but I just can't wait any longer!!! It's too funny!!! What's not to love about oversized heads on cartoonish bodies!

Merry Christmas!!From Brett and Trish! (Now, I realize there's not a speck of pumpkin in this post, but the snowman has an orange nose, and I'm hoping that will suffice. Cut the pumpkin lady some slack, will you? It's Christmas for the love of Pete!)

My Bretton... what a big snowman you have. (giggle, giggle, blush, blush)

Hardy har! The snowman got you! All the presents are mine... all mine!!! (It must be because of my super cool shades, that I was able to escape the clutches of the oversized snowman.)

All is well in the end, 'cause the Yeti has our backs. Hey! Watch were you put that hand, Mister Yeti-miester!

And all rejoiced with a fancy leap and spin around the ice! May you have a Merry Christmas... I mean winter... I mean holiday... I mean season of... oh forget it.

Have a lovely day, a BLESSED Christmas, and a delightful new year!!!
Posted by Tricia at 10:19 AM 2 comments:
Email ThisBlogThis!Share to TwitterShare to FacebookShare to Pinterest
Labels: Other Stuff

I've been out of the pumpkin-pocket lately.

Blame it on a minor cold, Advent's weight (that's a play on words for you religious folk out there), my current dislike of the flavor of pumpkin, the economy (we're still blaming everything on the economy, right?), Tiger Woods' string of affairs, and poor time management.

But I realize excuses don't get the bakin' done (or the bacon, for that matter), so here's what I've got for you today:

Preheat your oven to 350*. Whisk half and half, brown sugar, eggs, pumpkin, spices and vanilla in large bowl. Fold in bread (I used Hawaiian bread which is already sweet, like me) and transfer the whole mess to the a large glass baking dish. Let stand for 15 minutes. After it's waiting period (So you've got a waiting period to bake bread pudding, but not to buy a gun. That's a thinker.) pop it in the oven and bake for about 40 minutes.

While that's cooking, whisk brown sugar and butter in a saucepan over medium heat until butter melts. Whisk in cream and stir until sugar dissolves and sauce is smooth (about three minutes). Serve the whole thing, warm and with powered sugar sifted over the top. 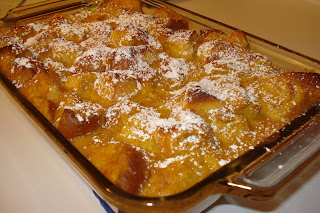 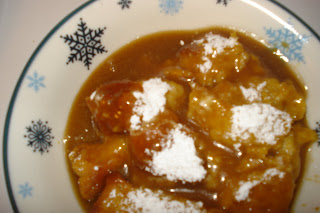 A dish like this deserves a little yuletide singing, don't cha' think?

I'd better stop... dogs are starting to howl in the distance and young children are running for their mother's bosom, wondering what that awful sound was that came out of the weird neighbor-ladies house.

I give this dish a solid A- for it's ease in preparation and taste(but let it be known, that I really like bread pudding) and my husband gives it an A (which means more, because he's not a bread pudding fan!). And I quote, "My faith in pumpkin is restored." (Brett, 9:56 p.m.)

Peace to you this Advent night. May the weight be bearable.
Posted by Tricia at 7:27 AM 3 comments:
Email ThisBlogThis!Share to TwitterShare to FacebookShare to Pinterest
Labels: Pumpkin Bread
Newer Posts Older Posts Home
Subscribe to: Posts (Atom)