A few weeks ago, I thought, "Oh... you know what I haven't had in a while... like since 1997, kind-a while?  Friendship bread!"  And because I had that thought in my head, I was somehow obligated to share that ever-so-witty-and-thoughtful thought, on Facebook.


Then out of no where, up pops a friend who offers a starter.  Stupid Facebook.  I rue you.  RUE!!

*I should note... I rue my thought and I really rue Facebook... not said friend, who nicely offered a starter and even did the "mushing" while I was out of town.  Just in case she reads this blog...

Yeah.  That last one has some serious issues.

So.  If you'd like an Amish Friendship Bread starter and you live... I don't know... within a three hundred mile radius of the KC metro area... they're yours! 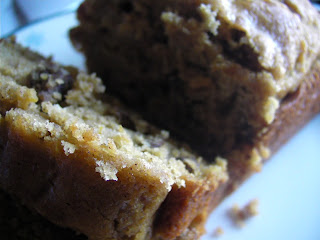 Pre-heat your oven to 325*.  Mix together the wet ingredients.  If only to make the yammering stop.  And just trust me on this one... that vegetable oil... that entire 2/3 of a cup... is about 1/2 cup LESS than what you'd normally be putting in, if you eliminated the pumpkin. So thank your lucky stars and move on.

Add dry ingredients; just go ahead and pile them all in there, then stir.  Pour into two well greased and sugared bread pans or six mini loaf pans.  Bake for about a 1 hour and 15 minutes.  A toothpick should come out clean. 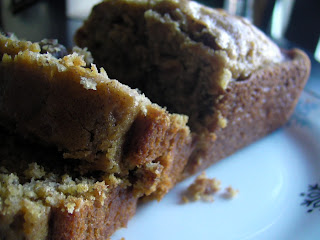 And then start the whole dang process over again in 9-10 days.

Everything is happening a little too fast around here... I started listening to Christmas music a full two weeks prior to my self-imposed "start date," which has been a fast and furious rule around here, for as long as we've been married.  Thanksgiving came out of no-where.  Boxes of Christmas decorations have been pulled out of storage since last Thursday.  The tree... up since last Saturday.  I have a wreath hanging on my door.  A WREATH... before Thanksgiving day.  This is not cool.

But it's a necessity this year.

It's probably not a surprise, but the Christian calendar provides a lot of stability in my life.  That long season of Pentecost... which always seems disproportionate with the actual length of the life of Jesus, comes to an an abrupt halt.  And we leap into Advent... breathing in the breadth of possibility and hope and new life in the midst of gray skies and dry, crunchy leaves.  I spend all year, longing for Advent... for the rhythm of waiting and sitting and anticipating and hoping for things not necessarily hoped for throughout the rest of the year.  I wait for the nesting and the baking and the smells of warmth and the glimpses of peace, in the midst of chaos.  Christmas lights make me weep and snow blanketing the ground, fills my spirit with much needed renewal.  I find warmth in the chill and comfort in the bustle.

But this year, it's all different.  We'll be gone for week two and three, of Advent... and I've lost my orientation, my rhythm.  I don't know how to "do" Advent and Christmas, without the week to week progression, the hearing of our biblical story, and the steady climb that we make, as church, to the birth of a newborn baby... the birth of hope.

So I'm satiating, with disproportionate amounts of butter and sugar.  And I made Paula Deen's Ooey-Gooey Pumpkin Bars.  Though they won't do a lot for renewing the spirit, they're quick and easy and they get the job done.  And I guess sometimes, that's all you can do.

What you'll need for the cake:

What you'll need for the filling:

To make the cake, combine all of the ingredients and mix well. Pat the mixture into a lightly greased 13x9-inch baking pan. And at this point you're thinking... well, this isn't SO bad (at least not for Paula Deen).  I mean, 8 Tablespoons of butter?  Yeah, that hurts a little bit... but it's not gonna kill me.  And then you make the filling...

In a large bowl, beat the cream cheese and pumpkin until smooth. Add the eggs, vanilla, and EIGHT MORE Tablespoons of butter... and beat together. Next, add the powdered sugar, cinnamon, nutmeg, and mix well.

Spread pumpkin mixture over cake batter and bake for 40 to 50 minutes. Make sure not to over bake as the center should be a little gooey.  Then serve it to your family... and have the car running in case anyone can't handle their butter. 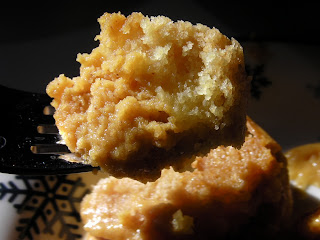 It's okay...it won't bring about world peace or sooth the weary soul, but you can eat it, knowing that it's not the last dessert you'll ever know... and just enjoy it for what it is... a little over the top, a bit cheapened by the commercialized-out-of-a-box taste, different than what you'd normally make...but still beckoning the holidays.

Blessings to you all this Thanksgiving Eve... may you know a rhythm of peace and joy and hope... even if it's a little different this year...
Posted by Tricia at 9:47 AM No comments:
Email ThisBlogThis!Share to TwitterShare to FacebookShare to Pinterest
Labels: Cake, Pumpkin, Pumpkin Cheescake, Pumpkin Puree

Never Had a Chance: Pumpkin Fudge

Do you ever have those moments, where you revert back to Middle School?  You know, those moments... where even if you tried REALLY, really hard... you couldn't be less cool?

In the seventh grade, I had a crush on this boy; his name was Brian.  (Interesting side note: over the course of six years in Middle School and High School, I probably had a crush on half a dozen different boys named Brian. It was my thing.)

Brian was dreamy in that scrawny, clean-cut, seventh-grade-jock-boy, kind of way.  Now rest assured, it was a rare day when someone would have used the word "dreamy" to describe me.  Instead, I was relatively invisible and a bit awkward in that "I know I'm too old to play with Cabbage Patch dolls, but I'd still really like one for Christmas" kind of way.  So when I felt a bit of "cool" coming on... I tried to go with it.  And by cool, I mean, I snuck makeup and a can of hairspray into the girls bathroom and went nutty.

One dreary day (and really, what day isn't dreary when you're in Middle School), I was riding high on my Aqua Net fumes as I descended the stairs to hell... I mean shop class... and encountered Brian coming up the SAME SET OF STAIRS.  I mean, it was like, fate.  And to this day, I can't tell you how I mustered the courage... but throwing caution into the wind... with much abandon and flair, I boldly said (out loud and everything), "Hey."

And then proceeded to fall down the stairs.  Hitting each one with a memorable bounce and an internal proclamation, to NEVER. RETURN. TO. SCHOOL. AGAIN.  Thank the Good Lord, my hair was there to cushion my fall.

Anyway... I had one of those moments the other day... only "Brian" was replaced with two strapping European men, a whole store full of women shopping a purse sale (so they sort of get a "pass" on this one), numerous clerks, and an ENTIRE movie theater full of people... nay, ADULTS... that could have told me that after shopping the clearance racks and trying on clothes at Macy's... I had put my shirt back on... very obviously... inside-out.

Seriously?  No one could mention it in passing?  Whisper a little something in my ear? Gesture wildly at their own non-existent tags?  Laugh, point, make a spectacle?  Anything!?

The worst though, was the guy who sold me my movie ticket that night... the same guy who wore a name tag which proudly read, "My favorite movie is Star Wars," and has probably seen the inside of Comic Con, one too many times... he had the audacity to give me Sad Face while he asked, "All alone tonight?  Just the one ticket?"  At the time, I thought..."Man, sucks to be single in the world."  But about half way through the movie, when I reached back and felt the oversized tags of my shirt, flappin' in the wind... I realize Comic Con Man was probably thinking, "Poor thing.  Never had a chance."

Well, that's how I feel about this Pumpkin Fudge.  Poor thing... never had a chance.

Stir together first 6 ingredients in a saucepan over medium-high heat, cooking and stirring constantly, until a candy thermometer registers 234° (soft ball stage) or for about 12 minutes.  This is pretty important: I have somehow misplaced the candy thermometer I bought a few years ago... so it didn't set up quite right, as evident by the photo below.  But if you don't mind eating your fudge with a spoon... 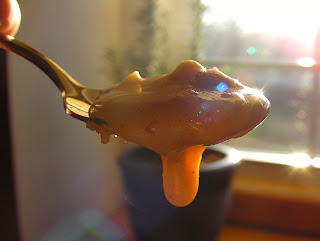 Once the mixture reaches 234°, remove from heat and quickly stir in the white chocolate, marshmallow creme (my love affair with marshmallow cream, has no end), nuts and vanilla until well blended.

Pour into the prepared pan. Let stand 2 hours or until completely cool; cut fudge into squares.  Or simply pull up to the pan with your spoon.

It's makes an odd first impression... sweet.  I mean sweet, in a way that turns your clothes inside out and makes your insides feel awkward.  But apparently, that's how I roll...
Posted by Tricia at 8:56 PM 2 comments:
Email ThisBlogThis!Share to TwitterShare to FacebookShare to Pinterest
Labels: Chocolate, Pumpkin, Pumpkin Puree, White Chocolate
Newer Posts Older Posts Home
Subscribe to: Posts (Atom)