I think I love you.

This morning,
I woke up with this feeling,
I didn't know how to deal with....

So, I made Pumpkin Cornbread with Pumpkin Chili. Comfort food. Love that feeling of warmth and fullness, food. I heart food. Probably not the healthiest sentiment. Oh well. Happy valentiney food.

Here's what you'll need for the Cornbread (via therecipegirl.blogspot.com): 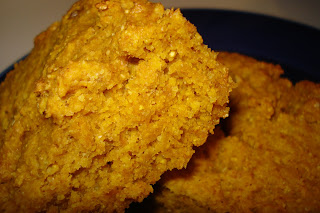 Preheat your oven to 400* and butter a 9 inch pan. Sift together the flours, baking powder, cornmeal, and spices. In another bowl, whisk together the eggs, sugar, oil and molasses. Make a well in your dry ingredients and pour the wet ones, into the well. Mix lightly (like Jiffy, don't overmix) and transfer to your greased pan. Cook for about 30 minutes. Serve warm and with a bit of honey butter.

And here's what you'll need for the Chili: 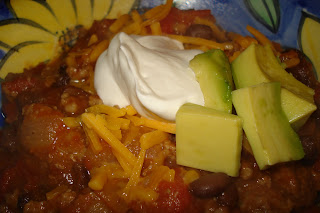 Cook the ground turkey, onion, and garlic together to brown the meat. If you used the turkey, there shouldn't be much fat to skim off, but if there is, go ahead and drain the meat/onion mixture. Return the pan to the heat and add your 'maters, beans, spices, and puree. Mix well and let simmer on low for about 20-30 minutes. Serve with sour cream and cheese. Wintery, comforty food at it's best.

(You KNOW you know the words. Come on!)

If you're terrified of singing (like I am) maybe it'll help to have David as you're back up...

Well, at the end of the day, the cornbread gets a C+ from Brett and a C- from me (I am a serious Jiffy fan)... but the chili made up for it! I think I love it... *unabashed head bopping*
Posted by Tricia at 11:12 AM 2 comments:
Email ThisBlogThis!Share to TwitterShare to FacebookShare to Pinterest
Labels: Pumpkin Bread, Pumpkin Chili, Pumpkin Puree, The Partridge Family

So the Super Bowl came and went. Yeah Saints. Good for you. (Oh, the enthusiasm.)

To be fair, I think watching a bunch of men wearing tights while hitting each other and making a few million dollars a day to PLAY A GAME... isn't really up my alley. Maybe I'm bitter. Maybe if I was making a million dollars a day, I too, would be inclined to wear tights in public. Heck, I might even slap a few of my clergy-friends on the hiney for good measure. Good sermon, Don. *slap* Splendid baptism, Susan. *slap* Bangin' choir anthem this mornin', Bill! *slap* I don't know... maybe it loses something, off the field?

But what I DO enjoy? THE OLYMPICS!!!! Winter, summer... doesn't much matter. The Olympics are about everyday folks (and yes, "highly over-paid, sponsored out the wazoo" American and European athletes included) loving the idea of their sport SO much that they want to share it with the world. THIS I love.

I really admire (and might just have a teeny tiny crush on) the likes of snowboarder Shaun White, who, during the XGames, hit his head on the edge of the platform so hard, that it knocked his helmet off! The redheaded phenom, was up and running the halfpipe three hours later and went on to claim the Gold Medal.

Once, I hit my hand super hard on a door knob as I was running up the stairs. (Yeah, you read that right. I was going up the stairs. Not my finest moment.) I'm pretty sure I broke my pinkie. I was out for three weeks while that thing healed. To this day, it still aches when it's cold or rainy. Maybe... just maybe... the Olympics aren't for me.

I digress. To make a long story short... every two years, Brett and I celebrate the start of the Olympic games by throwing a fondue party (the lighting of the Olympic flame, serving as our inspiration). I figured this year I'd throw together some pumpkin fondue, and see how it went over... 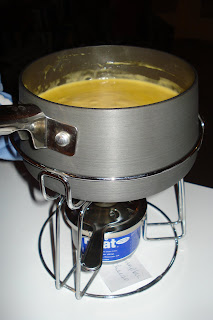 Bring the chicken broth, cream, and spices to a boil, then reduce to simmer. Add your cheese, a bit at a time, and whisk until smooth.

It was good, but a little bland for my taste. If I had to do it over again, I'd probably add more nutmeg, a bit of salt, and a 1/2 cup white wine.

Overall, I think folks would give this a B-. It's didn't exactly get gobbled up. Oh well. It was an experiment.

Now, you'll have to excuse me. The United States Curling Team needs me... which means I'll be icing down my pinkie for the next couple of hours.