For reals.  I made yogurt.  In my crockpot.  Like the pilgrims did.

It's sort of ridiculous... but I blame it on my Mother.  Like any good, grown woman, I still like to blame her for a number of things...

But Christmas shopping for my Mother, is like going to the dentist... the only way to get to the dentist though, is to trek barefoot through the Everglades, sidestepping alligators and predatory birds, and subsisting on nothing more than swamp water and mud.  And then once you finally make it to the dentist... despite all the anticipation and anxiety and remorse you feel for not flossing regularly... your dentist tells you that he was kidding and doesn't really have time for the procedure he scheduled you for......

Which is to say... it's tough. In fact, I'm still sort-a recovering from it, even one month later.

Thing is... she is not a woman of many wants... but she is a woman, who makes her own yogurt.

So THIS Christmas...well, let's just say, I thought I'd struck gold.  I was going to buy her an Automatic Yogurt Maker from Williams Sonoma.  I'll give you a moment to ooohhh and ahhhhh. (Photo credited to Williams Sonoma.) 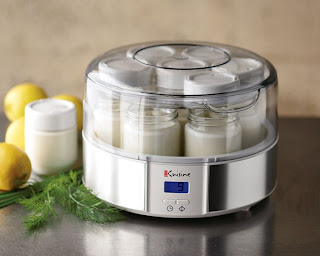 I read every review, searched every crevice of the Internet, checked out the Consumer Reports, talked it over with my husband... and at the end of the day, decided that this yogurt maker would make a VERY nice gift.

Because let's face it... any appliance that has only one, single use... is not for my Mother.  She got rid of her couch several years ago, and replaced it with a treadmill, 'cause the couch was "just sitting there."

So... it sort of got me thinking about making my own yogurt.  I won't get into the specifics, but I've been quite ill, off and on, since before Thanksgiving, and for a bit, I was subsisting on Greek Yogurt and blueberries... and figured it can't be THAT hard to make, right?  Right!

What you'll need (for the yogurt portion of the recipe):

8 Cups milk (I used skim!, organic)
1/2 Cup yogurt (From the store... apparently, you only have to do this once, and from here on out, you can use your own "starter." I used Organic Yogurt, but you don't have to copy me for evvvverything.  Go ahead.  Be you're own person.  Use Yoplait, you crazy cat!)

Um. Yeah, that's it.  Put the milk in the crockpot and heat it on low for 2 1/2 hours.  Unplug the crockpot but leave the cover on, and let it sit for 3 hours.  When 3 hours have passed, scoop out 2 cups of the warmish milk and put it in a bowl. Whisk in 1/2 cup of store-bought live/active culture yogurt. Then dump it all back into the crockpot. Stir to combine.

Put the lid back on your crockpot. Keep it unplugged and wrap a heavy bath or beach towel all the way around the crockpot for insulation. Go to bed or let it sit for 8 hours.

This is my crockpot, ready for a day at the beach: 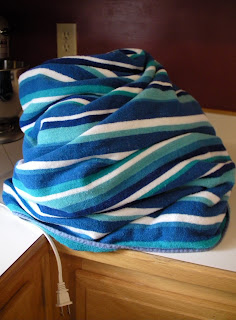 The next day, you can let it rest in a coffee filter to thicken up a bit (I didn't do this, as I seriously lack patience when it comes to food)... but that's it.

So.... I took it up a notch and as the purveyor of things pumpkin and decided to make pumpkin yogurt.

What you'll need (to make it pumpkin-y):

Mix it all together... 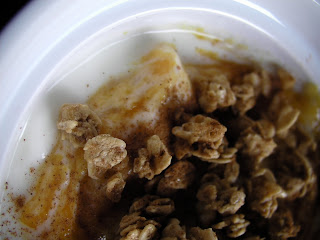 So, that settles it.  Mom is getting pumpkin yogurt every Christmas, from here on out.