Several days ago, I touched briefly on Silly Cardinal love. I will revisit that sordid tale of unrequited affection, on a later date. For now, I must speak of this: 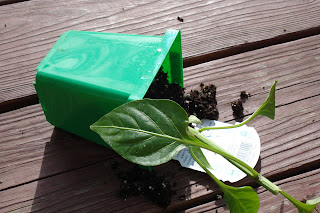 That's Bell. This was last Wednesday.

Word on the street (and by street, I mean the porch) is that the pressure got to be too much for Bell. I only wish someone had let Bell know, that there are other options. People who will listen... plants who will love you no matter what. But sometimes even that reassurance, doesn't matter. At the end of the day, all I know is that he was so young, so full of promise and well...Bell, will be missed.

Then, just as I was working through this fresh grief, yesterday, in an ill fated attempt at solidarity, Banana jumped as well. I arrived home several hours after the fact, to find this: 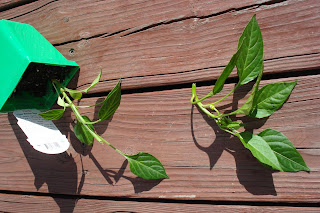 But my instinct tells me otherwise.

And my instinct thinks Banana was pushed.

But no one's talking. I sort of expected Squash to point some fingers (because everyone knows what a pushover Squash is). I've bribed Cucumber and Okra with extra waterings and promises of sunny days ahead. Nothin'. I got rough with Bean and Tomato... neither waivered.

I haven't had the heart to ask Jalapeno. It just seems cruel. But I think Jalapeno knows something. Unfortunately, there's a bit of a language barrier.

None-the-less, I'm determined to get to the bottom of this. Banana will not have died in vain. But until then, may Bell and Banana rest in peace. And eat cake. So here's your Banana Cake with Peanut Butter Frosting. (Get it? Banana pepper...banana cake? See the connection. No?)

Preheat oven to *350. Beat butter, 'nanners (save out 1/2 of a banana for your frosting), and sugars in a large bowl. Add the eggs and 3 tablespoons of the peanut butter too. Gradually add the flour and baking powder. Pour mixture in a greased 9x9 or 13x9 in pan and pop it in the oven for 30-35 minutes.

When the cake has cooled, beat your remaining nanner, peanut butter and milk until smooth. Add powdered sugar until smooth. Frost your cake and call it good.

If I were a detective on tv, I'd hand you my card, and tell you to "call me if you think of anything else you wanna share." But instead I'll grab my print dusting kit, and be on my way. And would welcome any theory you might have...
Posted by Tricia at 12:50 PM No comments:
Email ThisBlogThis!Share to TwitterShare to FacebookShare to Pinterest
Labels: Banana, Cake, Garden

Bird Lovin' and Other Things That Scream Spring

Bird lovin' is in the air. Just outside my window. At 4:30 in the morning.
We have a Boy and a Girl Cardinal in our back yard... and they MUST get together. Seriously, I'm about to set up a Match.com profile for one of them, just to get the ball rolling. Boy Cardinal screams and squawks and flutters around like she's the last Girl Cardinal on the planet. And the Girl Cardinal coyly twitters and giggles in the bows of the overgrown willow tree in our back yard. Flipping her tail feathers, batting her eyelashes, and playing hard to get. I swear... she's been reading too many teenage romance novels.
And Boy Cardinal is chatty. I mean, REALLY freakin' chatty. All day long... starting at the crack of dawn and quiting sometime after the sun goes down. And I'm about to go insane. Think Cathy Bates in Misery, insane. I'm plotting things in my head, that no good human being should be plotting. In might involve BBguns or major explosives... I haven't decided yet. It really just depends on what's legal.
Lack of sleep, has made me a very cranky girl.
But all that's to say, with Spring most certainly in the air... and one more pumpkin recipe to go... I needed a new project (that didn't include the demise of woodland creatures). And so I've started our garden. And I "may" have gone a little overboard. But I have it in my head, that I'm going to CAN this year!
*Hey, wipe that smirk off your face!*
We've been nurturing the compost for a full year now... and have planted every bloomin' seed in northern Missouri... so we feel really equipped. Despite the fact that we can't agree where the garden should go. Or that we lack the tools of harvest. Or canning. Or that, come July, I will despise every livin' minute out in the heat. But otherwise, we're good to go. 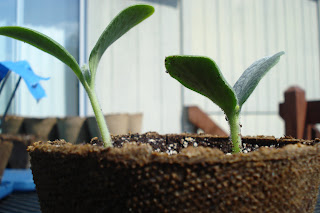 I've named that one on the left, Hope... and the one on the right, Promise. Brett has named them Ha, and Ha. We'll see if he gets to eat any of my canned Squash Butter, on those long winter nights...
So, here's to minor strains of botulism and a new lease on my blogging-life.
And in the biggest stretch ever, to relate a recipe to what I've just blogged about... here are Compost Cookies! Now that Christmas, New Years, Earth Day, and Easter are all over with... it's a great way to get rid of all the leftovers. And now that Brett's triglycerides are twice what they should be... it's a good way to get all the junk out of our house.
Here's what you'll need:
1 Cup butter
1 Cup sugar
3/4 Cup light brown sugar
1 Tablespoon corn syrup
1 Teaspoon vanilla
2 Eggs
1 3/4 Cup all purpose flour
2 Teaspoons baking powder
1 Teaspoon baking soda
1 1/2 Cups baking leftovers (I used white chocolate chips, peanut butter chips, toffee pieces, and bittersweet chocolate. I wish I had put some coconut in them.)
1 1/2 Cups snack foods (I used pretzels, almonds, and whoppers. David Lebovitz suggests using potato chips. Your call.)
Cream the sugars and butter together for about 3 minutes. Add the vanilla and eggs, and no joke, cream those guys for 10 minutes. I literally ran an errand while they were creaming. Add the flour, soda and powder and just barely incorporate. Fold in all the goodies.
Refrigerate the whole mess for at least 1 hour (and up to, a week). Preheat oven to 400*. Ball and bake for 7-10 minutes. Cool completely on the pan, before removing them. 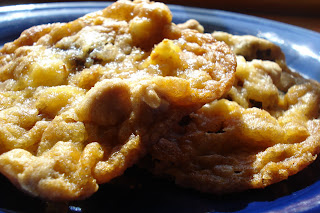 They were okay... they're flat, chewy little things, with lots of stuff. I don't really ask for much, when it comes to my cookies... sugar cookies with a little icing are money for me... so these were a little over the top. I'd give them a B. Good enough to give to someone you're trying to impress, but maybe not so good, that there'll be any expectations later.
May you find love this beautiful Spring day... just please... don't do it outside my bedroom window.
Posted by Tricia at 8:45 AM 2 comments:
Email ThisBlogThis!Share to TwitterShare to FacebookShare to Pinterest
Labels: Birds, Cookies, Garden, Love, Spring

Have you ever wondered why they're so mad? What's got them so grumpy on Easter morn? Is it the empty tomb? The rude gardener? The darn Disciples that won't listen?

Maybe it's more secular than that. Maybe they just didn't get the kind of Easter basket at the end of their bed, that they expected. That's understandable. Buns have high expectations these days.

Regardless, I always sort of picture Hot Cross Buns looking like this: 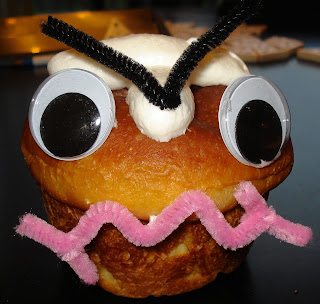 Only maybe less cute, and a little more sinister.

Anyway, I took a pretty basic Hot Cross Bun recipe and added some pumpkin. We're not huge fans of cooked raisins around here, so I used dried cranberries where raisins would usually go. Maybe that's what made them so cross.

Geeze. Get over it, buns.

In a small bowl stir together milk, yeast, and 1 teaspoon granulated sugar. Let mixture stand 5 minutes (it'll foam and seethe and throw a fit so you'll know when it's done).

In a large bowl sift together flour, allspice, cinnamon, salt, and remaining 1/2 cup granulated sugar. Cut butter into bits and with your fingertips or a pastry blender blend into flour mixture until mixture resembles coarse meal. Lightly beat 1 whole egg with egg yolk. Make a well in center of flour mixture and pour in yeast and egg mixtures, pumpkin, and dried fruit. Stir mixture until a dough is formed. If it gives you any attitude... as is the tendency of a cross bun... just keep stirin'. That bun'll get the message. Transfer dough to a floured surface and with floured hands knead until smooth and elastic, about 10 minutes. Transfer dough to an oiled large bowl and turn to coat. Let dough rise, covered with plastic wrap, in a warm place until doubled in bulk, about 1 1/2 hours.

On a floured surface with floured hands knead dough briefly and form into two 12-inch-long logs. Cut each log crosswise into 12 equal pieces. Form each piece into a ball and arrange about 1 1/2 inches apart on baking sheets. Let buns rise, covered, in a warm place until doubled in bulk, about 45 minutes.

Using kitchen shears, or scissors, snip a cross in the center of each roll. This is where you'll add the icing after the buns are baked.

While buns are rising, lightly beat remaining egg with superfine sugar to make an egg glaze. Brush buns with egg glaze and sprinkle with the superfine sugar. Bake buns until golden, about 12-15 minutes.

To make the icing: using a mixer, beat the butter until light and fluffy, and then add the powdered sugar. Add enough milk to make a thick icing. Flavor with a good quality vanilla.

With all the work you just put into making those buns, you'd think they might be a little more gracious.

Turns out, I'm not a huge Hot Cross Bun fan... all that negativity gets to me. And these take loads of effort... and if you read my last post, you'll know, I'm not so much into the "effort" these days. So I give these a C.

Heaven help us all... that won't help the attitude.
Posted by Tricia at 9:07 AM No comments:
Email ThisBlogThis!Share to TwitterShare to FacebookShare to Pinterest
Labels: Emotional Food, Pumpkin Bread
Newer Posts Older Posts Home
Subscribe to: Posts (Atom)