Just out of seminary, my husband and I moved to Scottsdale, Arizona… he to serve a church in the area, and me, to serve as the regional minister of youth and children’s programming… which meant, among other things, that I coordinated our summer camping program.


Now for those of you who have grown up in an area where you enjoyed camping as a family… count yourselves lucky.  Ten years of Girl Scouts turned me into a fire building machine… but they were skills lost upon the folks of Arizona, as most of those kids that came to camp, had never even seen an open flame, let alone sung songs around a campfire or given God thanks for the sweet gooey goodness that is a s’more.  And all that’s because, the entire state of Arizona is under some level of fire danger at any given time, during the hottest months of the year.
The church camp was about 3 hours north of Phoenix, nestled in the midst of an area of Arizona, that was part coniferous forest and part desert… as many lovely, awe inspiring evergreen trees populating the sky as there were unique and awkward cacti at your feet.  And as the summer drew on and the days between rain events grew… 22 days, 36 days, 54 days… both the evergreens and the cacti would strain under the desire to draw what little moisture might be in the dry ground, upward, with little success.  And each summer… those of us in leadership at camp, spent a good portion of our time, tied to the local news radio, monitoring which way the mighty rush of wind might blow… and if it would bring with it, tongues of fire.
The youth that gathered at that camp, were thankfully, almost always blissfully unaware of this threat of wind and fire in their midst. They would run and play, and sing song at the dinner table, make new friends, flirt with another, and reconnect with old friends whose lives only intersected once a year.


But one summer, as bags were being packed and the final day of camp was winding to a close…  the winds… they changed. And were bringing with them, fire.  Suddenly, tearful goodbyes, turned into tears of fear.  Parents rushed up the mountain towards the camp, praying they would make it back home before the roads closed. Leaders allowed cell phones to be out as boy and girl alike, made frantic calls to loved ones who were waiting in church parking lots, hoping, praying that their children would be safe and make it home in the church vans that they had entrusted them to...
Group by group, one by one… youth and leaders waved goodbye with worried looks in their eyes.  And I waved back… mirroring their worry, as I waited with the final few youth to find their rides and head home.  Soon, it was just me… and one camper.  Waiting.


I don’t normally condone a one adult/ one child situation… but this day, it seemed prudent to send the other counselors and adults home, to race the flames that now… though not visible, were making our eyes water and our nose hairs tingle.
Finally, after what seemed like hours, the girls mother showed… with a quick wave and a mouthed “I’m sorry”… she spewed gravel out behind her wheels in her hurried attempt to outrun…


The wind and fire.
And within minutes, I too was in my car… heading south on the road I had traveled so many times before… when I came to the first barricade.  The flames were dancing across the road now… I could see them.  They were real.  Red, orange, white, and black.  And above it, a red cloud of smoke.   A Fireman motioned for me to turn around… directing me to head North… to go a different way...and I did as I was instructed…
And then I felt it… the heat… the amazing, overwhelming heat.  And the weight upon my chest, like being in a sauna for too long… and that’s when I realize that I was now, driving parallel to a wall of flame.  Just like that… with a simple shift in the wind, the forest full of mile high trees and carpets of cacti, which I had just driven through, was being reduced to charred remnants of what was…


Wind and fire.
“When the day of Pentecost arrived, they were gathered together in one place.  And suddenly there came a noise from heaven like a mighty, rushing wind, and it filled the building where they were sitting.  And there appeared something like tongues of fire, distributed to all and resting on each.   And they were all filled with the Holy Spirit and began to speak in tongues, as the Spirit gave them speech.” Acts 2: 1-4 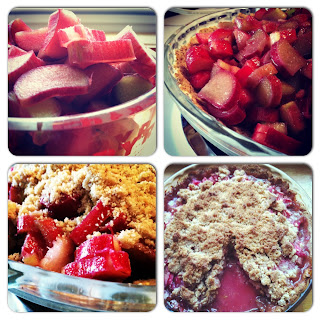 What you'll need for the filling:
6 Cups rhubarb, trimmed and cut into 1/2 inch pieces
3/4 Cup + 1 Tablespoon sugar
1 Tablespoon lemon zest
2 Tablespoons cornstarch (be aware, this is tricky for some GF folks...so an alternative, is arrowroot)

Preheat your oven to 350*.  In a food processor, pulse almond flour, coconut oil, salt and egg together until it starts to come together and form a ball. Press the crust into a 9 inch pie pan firmly; this isn't a crust like your granny used to make...it's not pretty, but it'll get it done.  Then bake it at 350* for about 8-10 minutes or just until it starts to brown.

In a mixing bowl, whisk the flour, brown sugar, and 1/4 teaspoon salt. With your hands, a pastry blender, or if you're lazy like me, your paddle attachment on your Kitchen Aid, work the butter into the dry ingredients until clumps form. Keep this chilled until you're ready to use it.

In a separate mixing bowl, combine the rhubarb, sugar, cornstarch and remaining 1/4 teaspoon salt. Toss well to evenly coat the rhubarb with the dry ingredients. Transfer this mixture to the pie shell.  Swoon over how pretty it is.  Scatter the crumble mixture evenly over the top of the pie.

Bake until the rhubarb is bubbling and the crust is browned, about one hour. If the crust browns too quickly, cover loosely with foil. Cool completely (or at the very least, until you can't stand it anymore) before serving.

This is my first time EVER, to make rhubarb anything....and I LOVED IT!!  I hope you enjoy it as much as I did...all two, extra large helpings.  With ice cream.  And an extra spoonful, when I was putting it away tonight (you GOTTA clean the spoon off).

Oh, who am I kiddin'.  I had three helpings and I liked it.

Tomorrow's another day to find the gym....

Might the Spirit surprise you today.
Posted by Tricia at 11:14 PM
Email ThisBlogThis!Share to TwitterShare to FacebookShare to Pinterest
Labels: Allergy Free, Gluten Free, Pie, Rhubarb